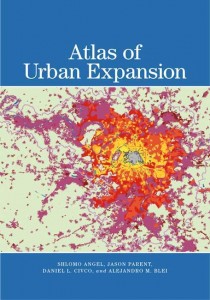 At a time when the world’s cities are bursting with massive increases in population, the Atlas of Urban Expansion is a comprehensive guide to the past and future characteristics of metropolitan growth. In 2010 more than half of the world’s total population lived in cities, and this share is expected to increase to 70 percent or more by 2050. The world’s urban population is expected to increase from 3.5 billion in 2010 to 6.2 billion in 2050, and almost all of this growth is expected to take place in less-developed countries. Cities in developed countries will add only 160 million people to their populations during this period, while Cities in developing countries will need to absorb 15 times that number, or close to 2.6 billion people, thereby doubling their total urban population of 2.6 billion in 2010. Given the expected decline in urban densities, these cities are likely to more than triple their developed land areas by 2050.

Increased global awareness is needed to better understand and plan for this massive expansion of cities in developing countries, Angel says. Local and national governments, civic institutions, international organizations, and concerned citizens must make minimum adequate preparations. For example, it is vital that cities acquire the rights-of-way for arterial roads that can carry public transport and trunk infrastructure and protect selected open spaces from encroachment in advance of the coming expansion.

The main objective of this Atlas of Urban Expansion is to increase understanding and help residents, policy makers, and researchers around the world come to terms with the expected global urban expansion in the coming decades. The call to action is urgent, as the urbanization process now underway will be largely completed by the end of the 21st century. “Most people who desire to live in urban areas will already be in them by 2100, but by that time it will be too late to act,” Angel says. “If the land required for public works or public open spaces is not protected from encroachment before it is developed, it will be next to impossible to ensure the orderly development of cities to make them more efficient, more equitable, and more sustainable.”

The Atlas in book form introduces the project and presents two sets of full-color maps and a set of raw data tables. The first map section contains pairs of urban land cover maps from circa 1990 and 2000, representing a global sample of 120 cities. The second map section includes composite maps of a global representative sample of 30 cities, showing the historical expansion of their urbanized areas from 1800 to 2000. In both sections, the maps shown are paired with numerical and graphical data, making it possible to compare cities in terms of their metric values on key attributes of urban expansion. The third section contains four extensive tables of urban, national, and regional data for each of the 120 cities.